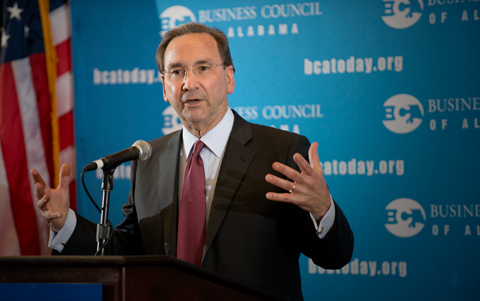 The 2014 legislative session that began Jan. 14 and ended April 3 saw significant results for Business Council of Alabama members and the entire business community of more than 1 million employees, their families, and investors, topped by enactment into law of Taxpayers Bill of Rights II legislation.

For more than a dozen years, the BCA has teamed with members, Governmental Affairs Committee members, tax experts, and legislators, to update the original TBOR, which first passed in 1992, and level the playing field in the tax appeals process by separating the tax adjudicator from the tax collector.

Since the beginning, the singular goal of this legislation has been fairness, and the Business Council of Alabama commends the Alabama Legislature for updating the current TBOR.

After passage by the House and Senate, Governor Robert Bentley signed TBOR II into law on March 11 as the Taxpayer Fairness Act. His early support helped move the bill and for that he deserves credit and our heartfelt thanks.

The law creates an Alabama Tax Tribunal independent of the Alabama Department of Revenue where the tax appeals process had been under an ADOR administrative law judge. The new department created from the ALJ division will become an independent executive branch agency beginning Oct. 1.

Its enactment ensures the appearance of taxpayer fairness during state and local government tax appeals. TBOR II is not only about tax appeal fairness but it’s also an economic development tool that shows prospective industrial prospects that Alabama’s tax fairness model is second to none.

If the legislative session was like a glass half full or half empty, our glass was nearly filled to the brim due to the approval of important measures sought on behalf of the state’s businesses.

Among the successes was the BCA’s opposition to legislative proposals that attempted to disassemble Alabama’s rigorous education standards or to usurp the authority of the Alabama State Board of Education. The voices of business and industry for the State of Alabama stood united in support of the standards that will ensure that our students are college- and career-ready when they graduate from high school.

The Alabama standards are the cornerstone of the state’s Plan 2020 to increase graduation rates, reduce college remediation, and raise student achievement. We believe that education standards that allow students to move from state to state, or region to region without fear of falling behind or repeating material, are critical to our economy and our workforce.

Let’s be clear about one thing: in no instance has the federal government taken over, or attempted to take over, Alabama’s education system, nor will our elected officials in the legislature or on the State Board of Education allow that to happen. That accusation is based in fear, not reality.

Our children need to be among the best educated in the world to compete for admission into the best colleges and to secure good-paying jobs. We feel strongly that this is a matter best left to the Alabama State Board of Education, a body created and empowered by Alabama’s Constitution to handle these issues.

Among the important pro-business legislation that passed were small-business tax relief, neutrality in government construction contracts, income tax credits for dual-enrollment students, and a workforce council:

House Bill 24 sponsored by Rep. Bill Roberts, R-Jasper, requires public agencies to pay contractors working on public jobs within 35 days after the contracting agency approves payment, instead of the current 45 days. Bentley signed it into law on last Wednesday.

HB 49 by Alan Boothe, R-Troy, codifies the establishment of the Alabama Drought Assessment and Planning Team that was created by Governor Bentley’s June 24, 2011, executive order. The bill reaffirms the governor’s ability to respond to extreme drought conditions under the powers provided under the Alabama Emergency Management Act of 1955, and allows the Office of Water Resources to promulgate rules. Gov. Bentley signed it last Wednesday.

HB 97 sponsored by Rep. Jim Patterson, R-Meridianville, was signed into law by Gov. Bentley on Monday of last week. It authorizes the Alabama Department of Revenue to administratively suspend collection of a tax or fee if the cost of collecting the tax is greater than the amount to be collected.

HB 151 by Rep. Barry Moore, R-Enterprise, is the Small Business Tax Relief Act of 2014. HB151 would raise the average monthly tax liability threshold, from $1,000 to $2,500, before a business is required to remit advance estimated sales taxes. By increasing the threshold, an estimated 3,900 businesses will be relieved of making estimated payments, allowing them to redirect those resources to other areas of their businesses. Gov. Bentley signed the bill on Monday of last week.

Senate Bill 7 sponsored by Sen. Dick Brewbaker, R-Pike Road, was signed into law as Act 214-185. It prohibits the Legislature from approving any unfunded mandate on municipalities of local boards of education unless there is funding to pay for the mandate or unless there is a two-thirds vote of the Legislature. Voters will soon see the issue on statewide ballots.

SB 22 sponsored by Sen. Phil Williams, R-Rainbow City, was signed by Bentley on April 2. The law prohibits the conditioning of licensing of certain health care providers on their participation or non-participation in health insurance plans or other activities.

SB 44 by Sen. Arthur Orr, R-Decatur, creates a method for “crowd funding” of securities of up to $1 million for business investment purposes. Investors will not be able to put in more than $5,000 unless the investor is an accredited investor. Gov. Bentley signed it on Wednesday of last week.

SB 48 sponsored by Sen. Clay Scofield, R-Guntersville, passed the Senate and House and was sent to Gov. Bentley, who signed it into law on Thursday. The bill would codify language to prevent employers from attempting to avoid their unemployment taxes by shuttering one business and creating a new entity, with no experience rating concerning layoffs.

SB 121, the Patent Trolling bill sponsored by Sen. Orr was signed into law by Bentley on April 1. The law will make it a crime for anyone to assert a claim of patent infringement in bad faith and authorizes the attorney general to investigate claims and file enforcement actions.

SB 163 is the air bag fraud bill sponsored by Sen. Jerry Fielding, R-Sylacauga. The law makes it a crime to knowingly install a defective air bag or to not install one. Governor Bentley signed it on March 11.

SB 217 sponsored by Sen. Paul Bussman, R-Cullman, and signed by Governor on Feb. 18, creates the Alabama Workforce Council. The appointed council consisting of state business and industry managers will advise and support the leadership of the Alabama Department of Education and the Alabama Community College System.

SB 355, the stormwater rules bill, sponsored by Sen. Cam Ward, R-Alabaster, was signed into law by Bentley on Thursday and makes a statement in support of businesses and the regulated community against regulatory overreach from the Environmental Protection Agency and duplicative environmental regulations. The BCA actively supported this legislation. SB 355 would amend and expand Alabama’s stormwater law to cover the entire state and not just Jefferson and Shelby counties and their respective cities.

Moving forward we will continue to be the leading advocate for existing industry by standing for a more accountable and efficient state government so that businesses can do what they do best: create jobs. Our mission at BCA remains simple and strategic: We fight every day for the businessman and woman to be able to sign the front of a paycheck, so that others can sign the back.