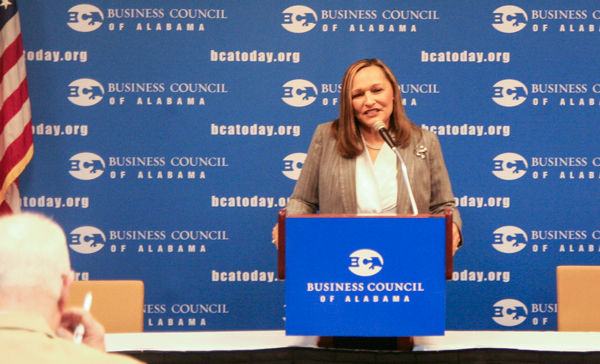 The Alabama Senate Minority Leader, Sen. Vivian Figures, D-Mobile, said that she will support the Taxpayers’ Bill of Rights II bill that has passed the House and is in position to be considered by the Senate as early as today.

Figures, speaking today to the Business Council of Alabama’s Governmental Affairs Committee, said the Senate Democratic Caucus has not been able to consider the bill because it has yet to meet in the legislative session that began last month. She said the Caucus is scheduled to meet Wednesday.

Figures, in her second year as Minority Leader and 18th year in the Senate, said that as a business person she is familiar with the TBOR legislation and likes what she has read about it. “I intend to support it,” Figures said.

She said a concern she has is the same as with any bill that would create a committee or commission – representative membership based on race and gender. “That will be my first concern that minorities and women will be added,” she said.

TBOR II as the bill is called would update the original Taxpayers’ Bill of Rights passed in 1992. The House approved TBOR II 97-2 on Jan. 16 and the Senate Fiscal Responsibility and Accountability Committee approved the bill on a 5-2 vote on Jan. 22.

The Tax Appeals Commission is scheduled to begin operating Oct. 1. It would consist of between one and three tax judges who would have to be attorneys experienced in state and local tax law. The current Administrative Law Judge within the Department of Revenue shall serve as the initial judge. The governor would appoint tax appeals judges based on recommendations of a nominating committee.

The bill would allow local governments the option of using this tax appeals commission or their existing appeals process to settle local tax disputes.

Members of the Alabama business community have joined forces with the BCA in support of the legislation under the banner of the Business Associations’ Tax Coalition (BATC), which includes 27-member business and trade associations. At least 31 states have passed a version of TBOR.

The BCA Governmental Affairs Committee meets each Tuesday morning during legislative sessions to hear speakers on current topics of interest to the business community.