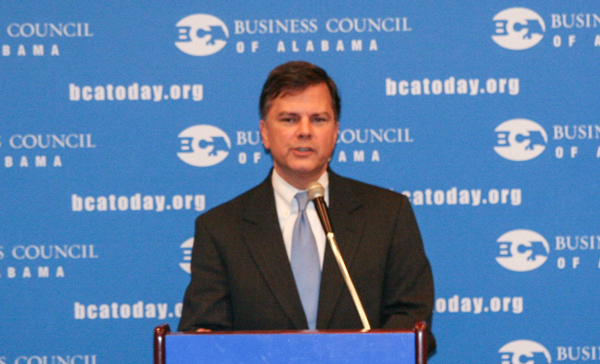 The chairman of the Senate Finance and Taxation General Fund Committee said today that the Legislature is considering actions that could create business opportunities in Alabama.

“Having the state compete with private business does not make sense,” Orr said.

Orr made the comments at the Business Council of Alabama’s Governmental Affairs Committee meeting where he was joined by Rep. Steve Clouse, R-Ozark, chairman of the House Ways and Means General Fund Committee

There is ABC retail privatization legislation in the 2014 regular session but Orr said it won’t be pushed this year. “We want people to see it as a starting point,” he said.

Orr said the Alabama Securities Commission is behind equity crowd-funding legislation that would make it legal for businesses to raise small amounts of money over the Internet much like political and non-profit groups are able to do. And patent trolling legislation seeks to prohibit costly lawsuits over alleged patent infringement.

Orr said R&D tax credits will help not only businesses but also four-year universities. “It’s a start … and will draw more R&D here to the state,” he said.

Also, Orr said, Alabama’s industry incentive plan needs adjusting in order to attract more business. “Our state has to do something to incentivize projects,” he said. The incentives could include a payroll tax credit for new jobs.

Clouse provided the back story by outlining the continued financial woes affecting the General Fund, the state budget that pays for non-education operations such as prisons, Medicaid, and state troopers.

Ten years ago Medicaid was 10 percent of the budget but this year it’s 35 percent of the approximate $1.85 billion state General Fund budget. “It’s squeezing everything else out,” Clouse said.

The ability to operate RCOs depends on whether the federal government will authorize Alabama’s request to waive certain Medicaid requirements and allow the use of federal dollars in the new RCO system.

Other General Fund pressures include underfunded prisons and the constitutional requirement to repay, within the next six years, the $437 million borrowed from the Alabama Trust Fund. “Next year we have to start talking about it,” Clouse said.