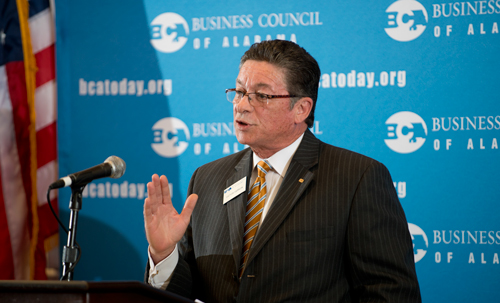 Victor Vernon, the Business Council of Alabama’s Vice President for Public Policy, was feted today at a luncheon in Montgomery in recognition of his retirement after nearly 18 years of helping level the playing field for business and improving all segments of public education.

Vernon and his wife, Cheryl, were guests at the BCA luncheon presided over by BCA President and CEO William J. Canary. He recognized Vernon’s key role in helping the BCA grow as an organization that is the leading advocate for Alabama business.

Canary said that upon Vernon’s retirement, he was reminded of a quote by former President Theodore Roosevelt: “Far and away the best prize that life has to offer is the chance to work hard at work worth doing.”

Canary said Victor served with honor, distinction, and integrity. Victor gave the business community, the private-sector BCA’s national and state roles, the political system, and the government his very best talents, and his family, his absolute devotion, Canary said.

“I have always enjoyed our working relationship but most importantly I value your friendship and loyal service,” Canary told Vernon.

“Victor acted with integrity, insight, and perseverance over the nearly two decades that he served Alabama business,” Canary said. “One of the hallmarks of a successful career is to leave an organization in better shape than when you began. Victor certainly did that. He leaves his imprint on not only the BCA but the state through his public and private service.”

Vernon has a long record of service including currently serving as a University of West Alabama board of trustee member.

Vernon is a charter member of ODE, the national honorary fraternity for economics. In 1998 he was the recipient of the Steven Gold Award from the National Conference of State Legislatures for making significant contributions in the areas of public finance and public policy.

He retired from state service in 1998 and joined the 13-year-old BCA that year. Over nearly 18 years, Vernon helped create BCA policy through the BCA’s volunteer committee structure that produces annual legislative agendas and then helped carry out the agendas working with legislative and executive branch agencies.

Vernon officially retired June 30. He said he and Cheryl plan to enjoy traveling and touching base with relatives, children, and grandchildren, and become more involved in volunteer work.

Vernon said he has witnessed the BCA’s growth from an organization that reacted more than it led to a proactive organization that creates and advocates for state policies that are essential and fair to business and education.

A crowning achievement last year was passage and signing into law of the Taxpayers’ Bill of Rights II, which updated the original TBOR first passed in 1992.

TBOR II abolished the Alabama Department of Revenue’s Administrative Law Division and created an independent Alabama Tax Tribunal that hears appeals of final assessments issued by or on behalf of self-administered cities and counties.

Passage of TBOR II was Vernon’s project for several years. Vernon said the Alabama Tax Tribunal’s separation from the state Revenue Department gives it the independence it needs for appellants with tax issues.

During his state service as Senate fiscal officer, Vernon advised the Senate’s fiscal process, directing the work of LFO staff analysts on all tax, budget and other fiscal issues pending before the Alabama Senate. That experience significantly enhanced the BCA’s ability to deal with complex legislative finances and their effect on business.

Vernon was a guiding force in creating Science in Motion legislation in 1994 that led to the high school science initiative and its umbrella initiative, AMSTI, in 2000. In January, The Alabama State Department of Education’s Alabama Math, Science, and Technology Initiative honored Vernon with its prestigious Friend of AMSTI award.

“We are extremely grateful to have someone of the caliber of Victor Vernon’s leadership in establishing the legislation that created Alabama Science in Motion and encouraging BCA to support the importance of quality education,” Canary said at the time.

Vernon said as he looks back what stands out is the ability to find money to help legislators balance budgets while in conference committee.

And serving on the UWA board is an honor, he said.

“This institution plays an extremely active role in the western part of our state that is economically challenged and is sparsely populated,” Vernon said. “The school helps life people’s lives up.”

He reminisced at his careers that culminated with advocating significant business issues that help create jobs and a better standard of living for Alabamians.

“When you speak for the BCA the legislators listen to you because you have credibility since you speak for the many employers in the state,” Vernon said. “At the BCA it’s our mission to look out for our members.”